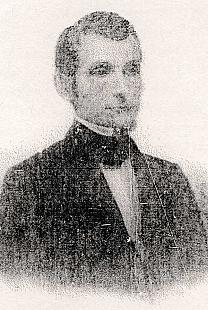 I teach about this man when I cover the Civil War era. This account is taken from a Christian History e-mail I receive daily. I thought it was worth sharing today.

JEREMY LANPHIER was born in Albany in 1809 but he made his mark in New York City. He moved there to find employment and became a success as a clothing wholesaler.

Although he attended church to sing in the choir, he was not a Christian. While attending the Broadway Tabernacle he discovered Christ’s provision for his salvation and claim on his life. Lanphier immediately became concerned for the souls of those in spiritual darkness around him. Unmarried, he was able to give his evenings and spare time to passing out tracts and talking to people.

Meanwhile, a Dutch Reformed church in lower Manhattan had been declining in numbers because as members prospered they tended to move to wealthier districts. The leadership decided to reverse this trend with an active visitation program. They offered the job to Lanphier and he accepted. He would spend entire days visiting members, witnessing in the blocks around the church, and holding Bible studies with anyone he could interest. The work depleted him spiritually, but he found he was recharged if he spent an hour at noon in prayer. Even so, his efforts seemed fruitless.

It occurred to him that if prayer were vital to himself, perhaps others would benefit, too. He obtained a room on Fulton Street and printed 20,000 flyers, setting the first meeting for noon on this day, Wednesday, 23 September 1857.

If ever there was a time to pray, this was it. Americans in the 1850s feared that a civil war was coming. Many were disillusioned with the church because William Miller and others had preached the end of the world in the 1840s.

Lanphier knelt to pray alone. His flyer, it seemed, had been dismissed by all who saw it. For half an hour, he remained praying in solitude. Then a man showed up and, without a word, knelt beside him. Then another. By 1 PM, ten knees were on the floor beside Lanphier. The following week, several more men appeared. By October, Lanphier had to get a larger building. On 7 October, he had forty businessmen as prayer partners and they asked to meet daily. The timing could not have been more perfect.

On 10 October 1857, financial panic struck America. Banks folded, railroads went bankrupt, factories closed, and unemployment skyrocketed. Desperate people turned to prayer. Such a great number of people flocked to churches that soon many places of worship around the city were forced to open their sanctuaries at noon and evening for prayer.. A reporter who rushed from sanctuary to sanctuary one noon counted over six thousand people praying—and he was not able to visit every meeting place. The New York Herald and the New York Tribune covered the phenomenon, bringing it to the attention of others.

The result was labeled America’s Third Great Awakening. People began to inquire how they might be saved. As many as a million people were converted or renewed in the revival that followed. Churches that had been dying filled anew with worshipers. The revival leapt around the world, primarily in regions occupied or influenced by the British Empire but also on the European continent.

Jeremy Lanphier continued his work in New York’s streets until he was too old to get around any longer. He died in 1898.