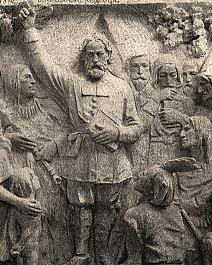 Here’s a post I received from the Christian History Institute that I think is worth passing on.

JOHN ELIOT arrived in Massachusetts from England in 1631. He would become one of the colony’s most famous immigrants. Educated at the University of Cambridge, he was ordained to the ministry before coming to America. In the New World, he temporarily filled a vacant pulpit in Boston before moving on to Roxbury in 1632. That same year he wed Hannah Mumford. They would have six children.

Three years after his arrival in Massachusetts, Eliot’s concern for the  Native Americans got him into trouble with colonial authorities when he protested the manner in which a treaty was made with the Pequods without their consent. But his actual ministry began in 1646. His Algonquin hearers asked thoughtful questions such as whether God would understand them if they prayed in their language, Massachuset (also called Natick). By then he had learned the Natick dialect.

He traveled throughout New England preaching among the tribes who spoke Natick, resulting in many Native Americans converting to Christianity. Some became pastors and missionaries among their own people. Eliot also obtained land for them. To provide for their spiritual welfare, he translated parts of the Bible and other religious works into Massachuset.

On 13 October 1652, after fasting and praying all morning, a number of members of the Massachuset tribe gave their testimonies and made confessions so that they might be admitted to a church of their own. However, the confessions took longer than expected and had to be postponed to a later date. War arose, and it was not until 1660 that the converts got a place of worship at Natick, Massachusetts. At the outbreak of King Philip’s War in 1675, there were eleven hundred Christian Indians in Natick and other towns, but their church would face impossible odds. Unconverted Indians attacked the “praying Indians” as traitors, and whites attacked them as “red men.” Caught in the middle, many died.

Eliot lived until 1690, doing good to the end. A visitor from England described him as “the best of the ministers who we have yet heard.” Among the work of his last years was instructing African slaves and teaching large passages of scripture to a blind boy. Hannah, his “dear, faithful, pious, prudent, prayerful wife” died three years before him, as did four of his sons. One son and daughter outlived him.

I'm Dr. Alan Snyder,
Professor of History. Ideas expressed in my books, articles, and online posts are my own opinions.