As I wrote yesterday, vacations are fine, even for presidents. But they need to be aware how their vacations are perceived by the general public. Going to Martha’s Vineyard, I noted, may make the president seem a little out of touch with what’s happening in the country as a whole. Perhaps he’s afraid of that very thing; he ducked photographers on the golf course yesterday so there wouldn’t be photos of him enjoying his golf game. Now, again, I don’t hold playing golf against him, but the perception is that he’s on a different plane [planet?] in some ways:

It’s almost as if his own perceptions are somewhat skewed, in that he can look at a very bad situation and think everything’s wonderful:

In a TV interview a couple of days ago, he insisted he had helped the economy with his policies, despite what anyone with even average mental capacity can see occurring. His call for shared sacrifice never seems to include the government. Nor himself. 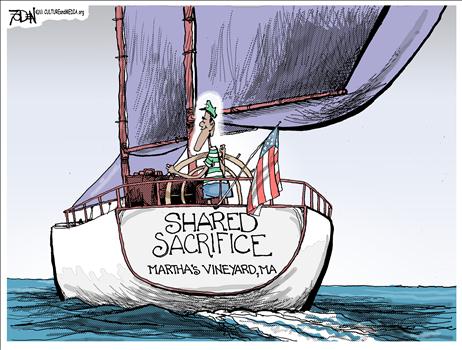 But as Bill O’Reilly commented on his program last night, please, President Obama, take as much time on vacation as you want. Having you out of Washington can only help:

Congress is on vacation also. When it comes back into session, it has to get to work doing what it does best:

We need drastic, fundamental change in how the system works. We need someone who will shake things up. That’s what I’m looking for in a presidential candidate—someone who won’t be boxed in by the very practices that keep us in bondage. Whom might that be?

I'm Dr. Alan Snyder,
Professor of History. Ideas expressed in my books, articles, and online posts are my own opinions.